Introducing Reuben: One Act Changed Everything

When Reuben returned to the cistern and saw that Joseph was not there, he tore his clothes. Genesis 37:29

This is my third of many (planned) Bible character biographies. Today, I'm going to focus on the Old Testament character of Reuben.

First, some background: Reuben was the firstborn son of Jacob, one of the Old Testament patriarchs. His mother was Leah, Jacob's first and "unfavored" wife. He had five full brothers, a full sister, and six half-brothers. He was the namesake of one of the twelve tribes of Israel. You can read about him in Genesis 29-50.

One of the first places Reuben shows up in the Old Testament narrative (other than his birth) is in, shall we say, a compromising position. And one that had far-reaching repercussions for himself and his descendants.

While Israel [Jacob] was living in that region [beyond Migdal Eder], Reuben went in and slept with his father’s concubine Bilhah, and Israel heard of it. Genesis 35:22

This was not a wise choice - but it wasn't until I did research for this post that I realized how unwise it was. Most remember the rivalry between Jacob's two wives, Leah and Rachel. And if you look in Genesis, you will discover that Bilhah was not only Jacob's concubine - she was Rachel's servant. Rachel - Jacob's favored wife, who died three verses earlier (Genesis 35:19).

Reuben wasn't all bad, however. It was he who saved his younger brother's life. As his brothers planned to kill Joseph, Reuben convinced them to change their plan.


When Reuben heard this, he tried to rescue him from their hands. “Let’s not take his life,” he said.“Don’t shed any blood. Throw him into this cistern here in the wilderness, but don’t lay a hand on him.” Reuben said this to rescue him from them and take him back to his father. Genesis 37:21-22 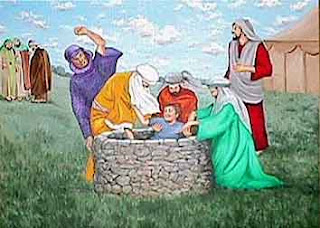 They agreed, but before Reuben could rescue the boy, they sold him off  to the Ishmaelites (you know the rest of the story, I'm sure. If not, check out Genesis 37 and following). And, it seemed, his guilt followed him, as Genesis 42:22 and 42:37 can attest. Perhaps this sense of responsibility and shame were his attempt to make things better with Jacob.

Yet, what he was remembered for most (especially by his father) was his sin with his step-mother's servant. Check out Jacob's final words to Reuben:

Reuben, you are my firstborn,
my might, the first sign of my strength,
excelling in honor, excelling in power.
Turbulent as the waters, you will no longer excel,
for you went up onto your father’s bed,
onto my couch and defiled it. Genesis 49:3-4

He lost his rights as firstborn, and his descendents even settled on the "wrong side" of the Jordan. It seems, no matter how much he tried to redeem himself, that one act changed everything.


Sometimes we forget that the people in the Bible are just that - people. They're not fictional characters created to make a point. They were born, lived, and died just like we did. And there is much we can learn from their lives.


Can you relate to Reuben? Is there "one act" that has defined you? Aren't you glad we're on this side of the cross?