I know - I haven't blogged much this year. But it doesn't mean I haven't been pressing forward. And it's good to acknowledge progress, right? So - here I am, doing just that.

At the beginning of 2015, I set some goals - and picked a one word theme. And, as I generally do around this time of year, I am going to look at them and see how I did.

What were they, you ask? Well, here you go - straight from my first post of this year:
And how did I do?
And - my one word last year was "Closer" - and I feel like it was "a success." It helped keep me focused on making progress in a lot of areas. 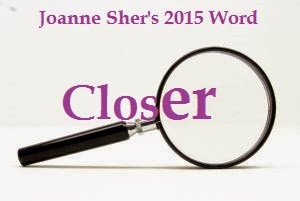 Watch for another post in the next few days on my word and goals for 2016.

My heart is stirred by a noble theme as I recite my verses for the king; my tongue is the pen of a skillful writer. Psalm 45:1
Posted by Joanne Sher at December 30, 2015

Email ThisBlogThis!Share to TwitterShare to FacebookShare to Pinterest
Labels: about me, goals/progress, picture books, writing