Watch For the Camouflage 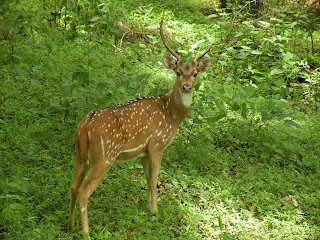 This time of year, it's a good idea to watch yourself when you're out in the woods--especially if you're Bambi.

You see, Michigan is right smack in the middle of Firearm Deer Hunting Season (it runs from November 15-30, if you're curious), and those hunters could be anywhere.

I'm not a hunter, as much as that may (or may not) surprise you. Nobody in my or my husband's immediate family is either (that I know of, anyway). I don't know that I quite get the fascination that folks have with heading out with their gun and shooting animals. 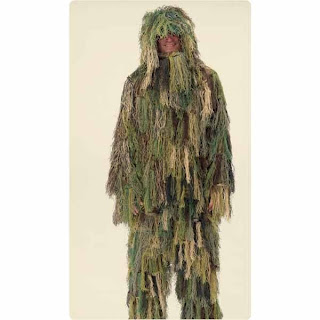 But camouflage I get (and if you're curious, I JUST learned how to spell that word!). If you're gonna be out among wildlife, you definitely do NOT want to be noticed. I'm not sure how smart deer are, but if I'd seen some strange two-legged creature walking through the forest with a stick and my deer friend suddenly fell to the ground beside me, I'd want to avoid those "two-legged creatures" from then on.

But if you are camouflaged (like this... um... handsome guy to the left, for example), the prey have no reason to fear--or at least they don't think they do. The deer will put their guard down, and before they know it: bang bang, fall down, venison jerky.

This reminds me of the sin in our lives. Sometimes, it's pretty obvious, and all we have to do is run the other way to avoid it.

But that isn't always the case.


Satan himself masquerades as an angel of light.  It is not surprising, then, if his servants also masquerade as servants of righteousness. 2 Corinthians 11:14-15

Satan, and sin, is often difficult to distinguish from the day-to-day stuff we do, and even the things that are glorifying to God. Doing the right thing for the wrong reasons is still wrong. Doing too much of a good thing can also be sin.

So, when things look fine, don't let your guard down. Sin is out there, disguised as fun or "not so bad" or something else equally harmless-looking. Watch for the camouflage.