I'm working on the rough draft of my first novel (NOT my first novel-length manuscript - not the same thing :D). Tentatively titled Handmaiden To A Princess, it's Biblical fiction set during the time of King Saul. The main characters are twins - both Gibeonites. The sister is Princess Michal's handmaiden, and the brother is a servant of Jonathan's. For the past several days, I've been typing in some of my handwritten notes (96 pages worth need to be done). I've decided, for this Friday, to post an excerpt - actually, what is right now the very beginning of my manuscript. This will likely change, but here's what I've got! Hope you enjoy it - and, of course, I'd love any feedback you're willing to give.


HANDMAIDEN TO A PRINCESS
She was a servant – relegated to her role by ancestry. She was also a child – required to obey and not be obeyed. Her wishes didn’t matter. They had already made the decision. Nothing could change it.

She could do nothing. She knew it. No matter how hard she pleaded, how badly she wished things would change, it wouldn’t happen.

But it didn’t mean she had to like it.

“But Mama – I’ll hardly ever see you. And what if I spill a basin? Or pick out the wrong dress? Or what if I don’t know what to do? Who will I go to?”

Dodi chuckled and shook her head. “You will do fine, Rivka. You’ve been watching and helping me for eight years. It’s time that you took on this responsibility yourself.” She rested her hand under her daughter’s cheek. “You know I must go where I am told, and so must you.”

Rivka sighed and rolled her eyes. “I know, but must I be alone?”

“We’ve been talking about this for moons, since Amal became Prince Jonathan’s servant. You’re ten years old, Rivka. It’s time for you to have your own responsibilities.” She raised her eyebrows. “Be thankful you’re staying with a place you know. It could be you, not me, who is sent to serve the queen.”

“Yes, Mama. Of course you’re right.” The corners of her mouth turned up slightly. She did like working under Michal. They were practically friends – as much as a Gibeonite slave and a Hebrew princess could be, anyhow. The two of them had been together for as long as she could remember. It was a comfortable place.

Rivka nodded. Mama was right. Everything would work out.


* * *
Rivka’s sandals flip-flopped on the dirt. Her steps were brisk and light. As she came nearer, the scents of the lilies of the valley and hyacinths slowed her pace. The grass before her, fresh with dew, slapped against the sides of her sandals. She stopped, closed her eyes, and took in a long, slow whiff. 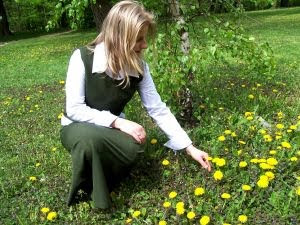 Aroma fit for royalty. And she was among them, and permitted to transport a bit of it indoors.

This was one of her favorite parts of her duties. Each day, Michal requested fresh flowers for a vase on her dressing table. And, each morning, Rivka ventured out onto the palace grounds to the royal gardens to find something beautiful and aromatic to please her mistress’ eyes and nose.

She sat on a rock and looked out at the array of colors before her. So many choices. Her eyes surveyed the gardens half a dozen times before they locked on a patch of purple and white blooms just to her left.

Rivka rose, strolled toward them, and squatted down. She pawed at the soil a bit, allowing it to envelop her fingers. The gritty, cold firmament put a smile on her face. She tipped back until she was on her bottom. Inspecting the flowers, she found a few with an especially pungent aroma. Finding no insect bites or other irregularities, she pulled up two bright ones from the center of the plant.

She inched to a standing position, the small bouquet in her hands. Eyes closed, she breathed in the aroma and smiled.

“And back to my mistress.”

As she strolled from the garden, she glanced at the rock she had risen from only minutes before. A tanned lad, perhaps three to four years older than she, was sitting upon it, a piece of papyrus and a stick in his hand. She didn’t recognize him – surprising because of her familiarity with nearly every one of the servants, at least by face.

She resisted her urge to walk toward him and peek over his shoulder. What if he was a royal emissary? Instead, she turned back toward the garden’s exit. As she stepped once again on the soil of the land outside the garden, she slipped her feet from her sandals and wriggled them until they were half-buried in the soil. The coolness on the soles of her feet and between her toes made her tingle.

She shook off each foot in turn and slipped them back into her sandals. Eyes ahead, she strode toward the palace and her mistress’ quarters.


* * *
“What took you so long? Mother said I must be dressed before noon.” Michal flipped her thick, curly hair from her face. “I mustn’t be late.”

Rivka lowered her head, then scurried to the vase. She plopped the new flowers in and tossed yesterday’s out the back window onto the field below.

“So sorry. Should I start with your hair or with your dress?”

Rivka opened the closet door, revealing a half dozen finely embroidered gowns in various colors. Her everyday clothing was tucked away in drawers, Rivka knew. But Michal wouldn’t be this anxious if she were simply wearing her “normal” clothing.”

Michal rolled her sparkling eyes. “Well, mother said the blue, but I think the red is much prettier. Don’t you?”

Rivka closed her eyes and gulped in air. She had seen this countless times, and Rivka’s mother had always set the princess straight, getting Michal to do what Queen Ahinoam wanted with minimal fuss.

But mama wasn’t here. And what made Rivka think Michal – a princess, and only two years younger than she – would listen to her?

Rivka opened her eyes and bit her lip, grabbing both dresses from the wardrobe.

“Actually,” the handmaiden muttered, “I think the blue brings out the blue flecks in your eyes so much better, and lets your features stand out. The red is so bright, I would scarcely notice your hair.”

Rivka put the red dress back in the wardrobe and turned toward the princess, her eyes lowered.” So…um…the blue, right?”

Michal went to the wardrobe herself and took the red dress out. She held it up in front of her, peering in the mirror, looking especially closely at her face.

Rivka clenched her teeth. “Mistress, if your mother said blue, you know that is what she expects. I can’t force you, like my mother could, but I can plead with you. I do not wish to displease you, but even more I do not want the king and queen upset with me. I have no desire to be transferred elsewhere, or worse, for disobeying.” Rivka lay the blue dress down on the bed and knelt before her mistress. “Please let me dress you in the blue.”

Michal, sighing, gestured for Rivka to rise. “Very well.” She returned the red dress to the wardrobe and turned back to her servant. “You may begin.”

Rivka allowed her shoulders to relax and the corners of her mouth to turn up slightly. One crisis averted—at least for now. But her pleading wouldn’t work every time, she knew. I’ll have to speak with Mama about it.
**
Thanks for reading. Be sure to link up below, and read the wonderful fiction selections in the linky tool.

Email ThisBlogThis!Share to TwitterShare to FacebookShare to Pinterest
Labels: Biblical fiction, fiction, Handmaiden to a Princess