One Step Closer...A Goals/Progress Update (and a pondering or two)

It's easy to look at rejection - any rejection - as a huge downer. But it doesn't have to be that way. And, to be honest, the rejection letter I got a few days ago was likely one of the most encouraging emails I have received in a long time.

He liked my manuscript. He thought it was "very strong." He said he was sure I wouldn't have any trouble making the right connection with it. The problem: he didn't have that "right connection"--none of the editors he was working with were looking for a book like mine. So, I move on and look expectantly for the agent/publisher who DOES. It's all in God's timing: right? And if you're wondering, I'm fine. Really.

Well, April was QUITE the busy month, both on and off the computer. But as I look at my list of goals for the month, I realize God placed my focus elsewhere. And that's okay.

ANYhow - my goals for April, direct from my last goals/progress post:

As far as words? hahahaha!! I spent maybe the first week or two of the month going through my ms (yeah, again!) and adding/deleting/rearranging. Got about halfway done with that - but I actually have a net LOSS of words (not much, but still!). But it's better. And that's what matters.

I got three Biblical fiction devos done (one short of the goal, but still good progress!), and with 17 posts in April, that's about as close to four posts a week as I can get. And I DID start agent research (but only after I got my rejection two days ago. If he'd sent it on the first day of May, there would have been a huge goose egg for this one as well), but am nowhere near done.

So, time to move forward - one step closer to the end of each of the projects God has put on my heart! 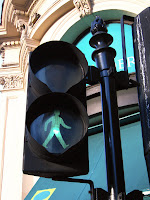 So, there it is! Ambitious, for sure. But that's the way I am. Thanks for reading, and for your encouragement!

Paving Rough Roads With God's Presence
Posted by Joanne Sher at May 01, 2011