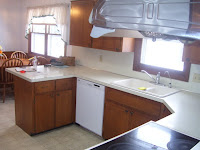 We haven't lived in our current house too terribly long--just eight months. But one would probably think that if my house made odd noises, I would have noticed before now. But I didn't. And there's actually a logical explanation for it.

You see, up until a week ago last Saturday, we had a cat. Her name was Squeak (because that was the only sound she made), and she had free range of the house. She climbed  and perched in likely every corner of this house, making all kinds of "exploring noises" as she went - patters, crunches (of paper and other things she might have been stepping on), rubs, and creaks. 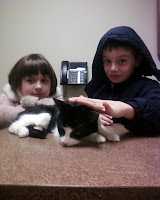 Well, last Saturday, we took Squeak to the vet because she just wasn't herself. In fact, it ended up she was so sick we had to put her down. None of us were very happy about this (Marc and I got her as a kitten just a couple years into our marriage, so we've had her almost as long as we've had each other), but we've adjusted.

But for the past week, I've heard noises coming from various parts of the house. My first thought is always, "Oh, Squeak is wandering around," but it can't be her. I'll be sitting alone in my chair--the kids at school, my husband napping--and I hear it. No possibility it could be anybody else.

So, I'm convinced these noises have been happening since we moved in--I just didn't notice them because I assumed they were Squeak. The noises were there--I just had a logical rationale for what was causing them.

And now it's confession time: I KNOW there must be a very cool spiritual principle in here somewhere, but today, it's not coming to me. So that's where you come in. What's YOUR takeaway from my little story here? There may just be a bit of a surprise for someone who comments with the best "moral of the story." (You have until Friday, by the way)