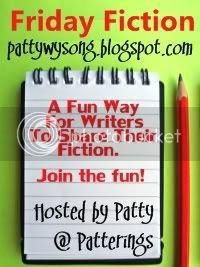 Welcome to my contribution to Fiction Friday, hosted this week by Julie at The Surrendered Scribe. Be sure to stop by her blog for links to some wonderful fiction. And don't be afraid to post your own - just link up in the gadget at the bottom of her post!

Didn't want you guys to forget me while I was on vacation, so I figured I'd schedule this for your reading pleasure. Wrote it a bit under a year ago for the Faithwriters' Writing Challenge. The topic was "Bridge." I hope you enjoy it!
FIFTY-FIVE YEARS BROKEN
The boards are rough and prickly under my bare feet. If I hadn't known better, I'd have assumed the builder of this walkway had forgotten to remove the bark from the trees from which the lumber came. But I do know better. The passage of time and the beating of the elements give it such a coarse texture.

How did I know? I was here, sitting on my favorite log on the west side of the gorge, when my father built this footbridge. In fact, after hours of cajoling and nagging, I got to sand down the rough edges of at least a handful of the boards that now bristle against my feet.

After I fell trying to jump the stream and nearly drowned, there was a "family meeting." They decided to save me from my own foolishness and create a safer way to get to the woods on the other side.

Don't believe I've ever walked across this bridge shod. Of course, this is my first time back here in years, and my memory hasn't exactly improved with age. Kind of like this bridge. I suppose I'm just about as weathered and rough as it is.

Fifty-five years is a long time away from this place. It certainly wasn't my choice: at least not at first. Sure, I could have come back once some time had passed--when I was on my own. Never really felt the desire, though: at least not until now.

It was on this bridge that I last saw Nick whole. I remember kicking a stone into the stream below as he told me he'd be shipping off to fight in Korea. I wanted to kick him instead. Couldn't believe he was abandoning his baby brother to go fight in some dumb war. Still don't understand sometimes.

"It was the right thing to do, Benny," he'd insisted. "I saved lives over there. Doesn't matter what I lost. I made a difference."

The family moved away from here a few months after Nick went overseas. He needed to be near a large hospital, and there wasn't one within a hundred miles of our hometown. No, he didn't stay overseas long, though I believe his left leg is still sprawled over that North Korean battlefield.

The first time I saw him in that hospital, all I could think of was how we'd never be able to chase each other across this very footbridge again. We could never again climb trees together in the woods on the other side. It was as if Nick had left my childhood on that battlefield, along with his torn flesh. It seems that I never quite got over what my brother had lost.

Actually, it seems I lost more than he did. There's just something about watching your hero broken. Bitterness and anger took over. No matter how Nick prospered and enjoyed his life, all I could see was that missing leg, and the opportunities he was missing because of it.

I never married, never stayed at any job for long. Yet old Nick, with his broken body, was full of purpose and joy and family. It wasn't long until my hero of a brother got added to the list of people I resented. I didn't speak to him for years--until last week.

And that's why I'm here, crossing this bridge. You see, Nick doesn't have much longer, and his last wish was to see me. Here, by this bridge. He bought land in the woods on the other side and put a small house there, where he's been living with his wife and kids for the last twenty years.

I knock on the door and his wife ushers me into Nick's bedroom.

"Thanks for coming, Benny." His smile belies his obvious pain, yet still seems natural, genuine.

"Nothing to be sorry about, my brother." Nick positively glows. It is then I notice he is grasping a Bible. "For I am already being poured out like a drink offering, and the time has come for my departure. I have fought the good fight, I have finished the race, I have kept the faith.*"

"Wish I could say the same for myself."

"It's never too late, Brother. Just let go of the resentment, and let Him in."

My eyes full of tears, I realize that my broken, dying brother is more whole than I have ever been. And I need to do something about that.


Thanks for reading! Be sure to stop by Julie's blog for more great fiction!