Introducing Elisha: In His Mentor's Footsteps

It's time for another Bible character biography - and this guy is one who had some serious proverbial shoes to fill. He started out as a student of one of the best-known prophets of the Old Testament - and ended up making a name for himself in his own right.

Elisha son of Shaphat first appears in the nineteenth chapter of the book of First Kings. His story is told there and in the book that follows, ending with his death in 2 Kings 13. (And a miracle related to his corpse - but I'll get to that later) He is also mentioned in Luke 4:27.

When the prophet Elijah went to anoint this man of God as a prophet, Elisha wasn't exactly doing the most "prophety" thing. He was plowing his land using twelve pair of oxen. He even drove one pair of them himself. (1 Kings 19:19) But as soon as Elijah threw his cloak over Elisha, he stopped working, got rid of everything related to his former work (1 Kings 19:21) , and began following this great prophet. There was no turning back for him. 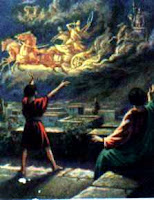 For several years (there seems to be a question exactly how many - but I saw everything from four to twently), Elisha served Elijah in the background - his name is not mentioned in God's Word until the last day of his mentor's life. On that day, in a certainly familiar story, Elijah is taken away by God in a whirlwind. (2 Kings 2:11-12)

Before Elisha's great teacher disappears, he asks him for a double portion of Elijah's spirit. Elijah promises to grant it, as long as his mentee watches as Elijah ascends to the Father. Elisha does as he is told, and, as evidenced from his ministry following, the man received his wish. 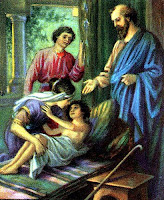 This was a man dedicated to his calling. He spent years learning from one of God's most faithful prophets, then took what he learned and served the Lord diligently in his own right. Definitely a man to admire - and emulate.

How are you like Elijah to someone? Elisha? What parallels do you see between these two prophets and being a follower of Jesus?