Guest Lynn Gipson - Grace is Calling - God is So Good

Welcome to my Wednesday feature God is So Good.  Here I will share stories - true and fiction, mine and others' - of the  Lord's presence in the midst of trials, struggles, and difficulties.

I know Lynn from FaithWriters - she is a sweet soul, a real encourager, and, as I learned recently, a cancer survivor. When I read this testimony, I had to share it with you. I hope it blesses you as much as it did me.


Grace is Calling
By lynn gipson
The phone rang today. It was Grace. Not a lady named Grace, but a doctor named Burnett. "Your biopsy came back negative," he said.

Hello? Grace calling once again. I've had many calls from Grace in the past three years and I know the voice so well, though the voice always changes and it does not necessarily have to come through the phone line. Sometimes Grace can be a man and sometimes women. Sometimes a doctor and sometimes a friend.

I am a cancer survivor. I was told three years ago I didn't have long to live. Seizures from a brain tumor should have killed me, but Grace called up and said, "Not yet dear." Surgery took care of the tumor.

Stage four colon cancer then tried to steal me but Grace called again and said, "no, sweetie, still not your time." A cocky young surgeon showed up and must have been Grace. He did my surgery for free because I had no insurance, and it was extensive, expensive surgery. He did it for free because he was convinced he was the only one who could do it properly. Then Grace came disguised as an oncologist, and I know he came straight from God because I could see right away he was a healer. He told me he could fix this and he did. Grace calling.

Grace appeared again when a man in Florida who had never seen me before heard of my plight and helped me get the insurance I needed to get back into the hospital I owed so much money to. I was waiting for financial aid and meanwhile my cancer had spread to my uterus. That man deserves a purple heart and a crown in heaven because I am convinced he saved my life. Grace calling again.

Meanwhile, I've had so many calls from the Grace of God I can't begin to count them. At night when I was alone for the month I was in the hospital, Grace called out to me all the time. Grace came in the guise of nurses, doctors, therapists and my two granddaughters.

The good Lord knows I don't deserve Grace, but He loves me regardless of this, and He knew I was all alone in this world so he sent me one of His greatest gifts.

I get calls from Grace every day, telling me I am loved, worthy of life and forgiven. I am at a loss for words to describe how grateful I am. Surely God is saving me for something better than the life I have lived so far. 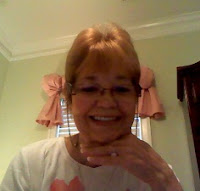 I had a doctor's appointment last week. Something suspicious made a biopsy necessary. I worried as I waited for the results of the test and for the doctor to call. I should know by now I need not have.

The phone's ringing again. It must be Grace.


Lynn Gipson is a relatively new writer. She writes articles, poems, and short stories of a Christian or spiritual nature. A born again Christian for three years, she is also a recent cancer survivor. She lives in Southaven, Mississippi.

Article Source: http://www.faithwriters.com
**
No matter the struggle, He and Grace are always there. GOD is so good!