Though you have not seen him, you love him; and even
though you do not see him now, you believe in him and are
filled with an inexpressible and glorious joy. 1 Peter 1:8 NIV

It was a surprising sermon title. Turned a "famous phrase" on its head. But I probably shouldn't have been shocked. After all, it is Jesus who says the last shall be first and the first, last.

Still, this was one I'd never heard of. And the more I thought about it, the more I wondered how it could be true.


How could BELIEVING be SEEING, instead of the other way around?

And then I listened to Pastor Pike a week ago yesterday, and I thought about my own experience. And I got it.

Before I was saved, the gospel was foolishness to me. Everything that happened was, in my mind, either my own doing, the action of someone else, or coincidence.

I wasn't a sinner - because to me, there was no such thing as sin. Sure - there were things that were bad. Morally wrong even. But God's standards were not mine, and I saw no need to make them so. 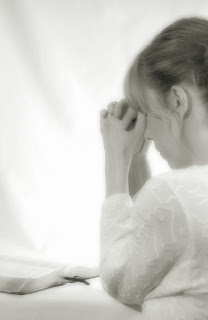 If someone could prove to me God's existence - let me see Him with my own eyes, perhaps - maybe then I could believe in Him and the standard He had for me and mankind. Then, seeing would be believing.


But that's not how it happened.

On that day in February thirteen years ago, I BELIEVED that I was a sinner. That Christ died for me. That He rose again and was preparing a place for me in heaven. That I could have eternal life if I trusted His work on the cross to be payment for all the sins I had committed and had yet to commit.

And it was then, and only then, that I could SEE my sin. SEE God's hand in my every circumstance. SEE God's love in those who love Him.  SEE how lost I once was. SEE the spiritual battles that were around me - in fact, right in front of me - since the beginning of time. SEE the truth in God's Word. SEE His orchestration of events.

And now that I can see, He fills me with an inexpressible and glorious joy that I would never have without Him.


So, I guess believing is seeing after all.

How often do you need to see something to believe it? How has your faith in Christ given you eyes to see Him? Is seeing believing, or the other way around?