I was (almost) desperate for a guest post for today. Had been praying about it for a couple days. Then, a name (and blog!) I'd recently discovered (like this past weekend) came to mind. Found him in FaithWriters Free Reprints, and went to his blog, and found this amazingly encouraging post. Asked if I could use it. He said yes. Praying it blesses you as it did me - AND that it reminds you to look for those slow miracles.


Vincent's Slow Miracle
By Anthony Weber
(reprinted from his blog, with permission)

On Saturday, Sheila brought six-year-old Vincent home from a party and said to me, "Do you realize it was just a year ago we weren't sure this would ever happen?" I had forgotten; she was right.

From as far back as I can remember, Vince always struggled with any kind of boundary. When he was one and two years old, he could not sit in his car seat for more than 10 minutes without screaming.  Trips to Meijers were too long for all of us.  We seldom traveled.

We took the chance when he was almost two, and we flew South for Christmas to see family.  He screamed there and back.  I was physically ill for a week after our "vacation."  That summer, he began to run onto the road outside our house and stand on it, I guess just waiting for cars.  We fenced in the rest of the backyard and locked the doors of the house, but he still snuck out.  A policeman brought him to our door once; we had no idea he was gone.  How many times over the years did I say to people, "My goal is to get him through this next year alive"?  I wasn't joking.

He wouldn't go outside during the winter until he was five, because  hats and gloves were too restrictive (he still sheds his socks and shoes at a moment's notice).  He refused to color inside lines (not a joke).

He had no concept of why boundaries existed.
He had no idea that they were meant to protect him.

Two years ago,  we had Vincent tested for autism.  At the time, both his teacher and I saw enough symptoms that we decided a test was in order (he was watching trains for hours; standing in a corner and flapping his hands when upset, etc). The initial test suggested he had Fragile X Syndrome.  I should have known better than to look that up online.  It was not a diagnosis full of hope.

The second test showed he was not on the autism spectrum, but was instead "developmentally delayed."  I could have told them that. (My favorite moment in this whole process was reading how Vincent got tired of all the tests and crawled under the table, so two adults went under the table with him to finish the test). 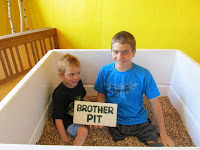 This diagnosis was actually good news.  One well meaning person said she was "praying against the spirit of diagnosis." I had not been aware there was one, and I appreciated her concern, but the reality was that I was relieved.  Sheila and I knew something was wrong; we just didn't know what.  Now we did.  With the right diagnosis comes the proper cure.

A year ago, Vincent was splitting time at two schools because he was "Developmentally Delayed."  In the mornings, he went to class with about 20 other kids with a similar diagnosis.  When he would go to the Christian school where I teach in the afternoons... it didn't go as well.  About the time he completed the DD class and was declared "normal,"  we had to pull him out of school all together and put him into daycare.

How quickly I have forgotten how sobered we were.

Just 5 months ago, at a crowded museum in Gatlinburg, I dedicated my entire museum-going experience to watching him.  I lost him three times.  The third time I utterly, completely lost track of him, and in a panic started looking in the closest room.  He was sitting there watching TV, with no idea how disastrous the results could have been.
This "unboundaried" existence has not always translated into "plays well with others."  He could not comprehend social boundaries any better than physical ones.  He would just take stuff from kids, and sometimes hit them, and didn't seem to really care what they thought of him.

On the other hand,  he was amazingly energetic and outgoing, constantly laughing and talking. Most adults who experienced him in small doses thought he was a hoot, but his peers, his parents, his brothers, and his teacher got both barrels.

This has not been a life without joy.  Vincent is hilarious on his good days, and he loves people and activity.  I have a collection of things he has said that crack me up no matter how many times I read it.

This year, he started real school.  We spent the first couple weeks on pins and needles, but nothing major blew up.  Then, he won an award for something in chapel - I don't remember what, but frankly, it doesn't matter.

HE WON AN AWARD.


Then, he started talking about his friends - they were peers, and they liked him.  One classmate told his mom, "Vincent drives me crazy.  But he's my best friend."

Vince started actually doing homework without having a meltdown.
He tried some foods he never tried before.
He told real jokes.
He played Monopoly and did not make up his own rules.
He fished our goldfish out of the pond (wait..that's a different list...)

He sat through a whole movie at the theater, unlike the time I literally chased him around the perimeter of the State Theater in Traverse City one unforgettable Saturday morning while Braden calmly watched "The Secret of Nimh."
He colors recognizable pictures.
He gets invited to parties by genuine friends.
He goes; he does not try to open the birthday kid's present.
He does not get into a fight or disappear into the backyard.
He keeps his fingers out of the cake until the appropriate time.

I know a lot of people face tremendous challenges with their kids that make our experience pale in comparison.  My point is only to note something that may be common to all of us:  after so many years of praying for a change, how easy it is to overlook the slow miracles that God provides.

Anthony Weber is a pastor, high school and college teacher, coach, husband, and father of three boys. He has been a teacher for 14 years (Traverse City Christian School, and recently as an adjunct for Spring Arbor University), a pastor for 9 years, and an occasional construction worker almost all his life. He has published a book on the journey through grief entitled Learning To Jump Again (http://www.learningtojumpagain.com).

Anthony and his wife, Sheila, currently live in Traverse City, Michigan with their three boys, two cats, and a dog named Trixie.  In his spare time, he promotes good athletic programs by prominently displaying Ohio State's logo and trying to keep up with the local Cross Fit maniacs at the gym.
**

Don't you love the idea/concept of slow miracles? I know it grabbed me. And Vincent certainly is one. I can think of several others in my own life too. Bet you can as well. God is SO good!