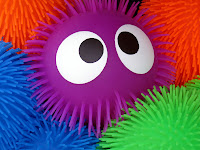 One of the things I struggle with some in my writing is point of view (aka POV).  I've definitely gotten better (and I've even been told that I explain it pretty well), but it's definitely a concept I don't QUITE get correctly without some serious thought.


In essence, POV is the perspective from which the story is told. It's based from whose eyes the story is seen through. Most commonly, novels are told from the main character's (or characters') point of view.

Here's a snippet from my current draft of Handmaiden to A Princess. This novel has two POVs: Michal and Amal (but not at the same time, of course!) As I was looking it through, I found a POV issue. See if you can spot it as you read...

He waved her off. “I’m almost done, Mama. Just give me a moment.”

She looked at Rivka and both shrugged their shoulders. “If you want cold stew,” his sister said, “then take your time.”

“Just a few more moments,” he said, annoyed, “and I’ll be there. No time for the stew to get cold.”

Rivka and Dodi sat and enjoyed, their stew bowls in their hands, dipping some flat bread into it and savoring the flavor. Within a few minutes, Amal had joined them, but not before storing the bow in a box beside Rivka’s feet.

Did you catch it? If this scene is from Rivka's point of view, then she shares some information she can't possibly have. Rivka does not and cannot know, through her observations, that Amal is annoyed. That either needs to be conveyed in a different way, or dropped - otherwise it's a POV shift.

But what if it's from Amal's point of view? Then there are even more issues. He's busy with his bow, so not only would he not see Dodi and Rivka shrug their shoulders, but he would have no idea what, or how, they were eating as he worked.

In this case, it was the latter, so to fix it, I took out the sentence about the ladies looking at each other, and rephrased the last paragraph so it was told from Amal's eyes.


Within a few minutes, Amal had joined them, but not before storing the bow in a box beside Rivka’s feet. Both Dodi and Rivka’s flat breads were nearly gone, bits of stew dripping from the remaining chunks.


For more extensive information on point of view, check out this awesome post from Pix-N-Pens on just that topic: Editing Tip #46: Point of View


DO YOU STRUGGLE WITH POV? DO YOU UNDERSTAND IT? HOW WOULD YOU HAVE CHANGED THIS MISTAKE?

Email ThisBlogThis!Share to TwitterShare to FacebookShare to Pinterest
Labels: Handmaiden to a Princess, writing