Not What I Expected

This is an exciting time for me and my family. After several months of waiting and looking and discouragement, we are closing on our current house TODAY, and on the new house we are buying on Wednesday. This has ALL been from God - so many little details that amaze me, and that I WILL share in a post at a later date.

Yes - for those of you who have been on my blog for a long time, this IS a repeat. I wrote it a year and a half ago and it has been on my heart A LOT over the past week or so.  I have not updated it - except for the picture below.


NOT WHAT I EXPECTED

This absolutely poured out of my heart, through my pen, and onto paper on September 27,2008. I originally thought I was writing fiction, but God showed me otherwise. I pray that it blesses and touches someone else. I know it has me.

My son’s voice, almost a scream, decreases in volume as he speeds away on his too-small bicycle. I look up from my clipboard and smile at the streak zooming away in the distance. “Hi, Andrew."

Probably too late to buy him a bike that fits for this year. October is only a few days away, and the rain—and eventually the snow—will prevent him from riding much if at all before the spring thaw, and who knows how much bigger he’ll be by then? He’s not complaining, anyway

Fall has been so slow in coming this year. Here it is, September 27, and I’m in shorts and a t-shirt. It’s probably in the upper 70’s, if not 80. I’m usually drinking hot apple cider by now, but currently a glass of ice cold lemonade sounds much more appealing.

Yet, the autumn signs are upon us. The kids are back in school. They have been for nearly a month. The local grocery store has had Halloween costumes and bags of miniature candy bars at the front of the store for weeks. And the oak tree in front of our house is beginning to put on its fall colors and drop its “clothing” onto the grass below

As I survey the school playground from my vantage point under a small shade tree, I notice that my oak isn’t the only foliage beginning to display its seasonal beauty. The branches above my head, last month covered with a lovely green, are beginning to include tinges of yellow. The grass I sit upon has been sprinkled with those same yellow leaves, along with some brown crinkled ones. No matter the temperature, fall is here, meaning winter is closer than I’d like to think.

I look up to find Andrew has left his bike by me (where his helmet is nobody knows) and is now playing in the sand with his younger sister Annika and two other kids who, from here, appear to be about Annika’s age.

It makes me think of my own childhood. When I was in elementary school, I would always feel more comfortable with younger children. Sure, I had a few friends the same age as I was, but if given the choice, I would opt to play with kids a couple of years younger. I liked their games better—the simplicity of them, I suppose. My step-mother would discourage it, but it certainly didn’t change my preferences. It wasn’t until I was in my mid-teens that the majority of my friends were of my own age group.

I wonder what kinds of struggles Andrew will have as he grows up in a world where he doesn’t quite fit. What do his “second grade friends” think when they see him acting immaturely? Do they whisper about the fact that he’d rather watch “Dora the Explorer” than “Spiderman?” Do they shy away when he’s too demonstrative? Does he understand—will he ever understand— that his awkward movements, his inability at times to control his energy and emotions, are likely to make him a “less than ideal” social companion to some? Does he realize that some people are laughing at—not with—him?

Will he ever be able to think abstractly—beyond the rote memorization where he so excels? Can he truly understand the salvation message? Will his sister, nearly three years younger, soon advance emotionally, intellectually, and socially beyond him? Will that bother him? Her? Me?

As I sit beneath an autumnal tree on this summerish afternoon, I am reminded that life doesn’t always happen the way you suspect it will. Sometimes there are snowflakes in May. Sometimes it’s 80 degrees in autumn. And sometimes your child isn’t exactly what you were dreaming of when the doctor first told you that you were pregnant.

But just because life isn’t predictable doesn’t mean there is no reason to rejoice and thank the One who put the world, and every “off kilter” part of it, in motion. It is all from Him: the summer snow, the autumn heat, and my mildly autistic son. And though life may be hard and, yes, unpredictable, I know Andrew and I will both be richer for it, and that my son will (and has!) bless me and others in ways that he never could if he were “normal.” And because Andrew is undoubtedly my gift from God, I know that he is right where he is supposed to be. 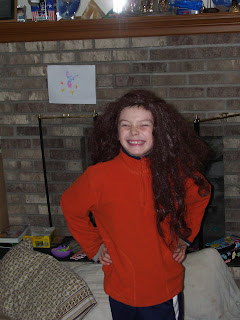 I love you, Andrew, just the way you are.

Heavenly Father, thank You for meeting me under the tree in the Kettle Lake playground this afternoon, through my own pen. I praise You for working in me to think and pray through this issue I didn’t even know I had. Help me, Lord, to trust You, and to turn my wonderful, special son—and my concerns about him—over to you as many times as I must until I really mean it. Thank You, Lord for knowing all and for being in control. And I thank you especially today, dear Lord, for my precious son. In Your Son’s name I pray. Amen.