Over the past week or so, a single thought has occupied a portion of my mind - sometime a back corner, and sometimes the very front. And I couldn't let it go by without blogging about it.

Those of you who also know me through Facebook and Twitter have heard, at least a few times, about Army Corporal Nick Roush, who was killed on Sunday, August 16 in Afghanistan when an IED exploded. He was a "local kid." He and his family have attended my church, First Baptist Church of Middleville, since he was a boy.

On Friday, the body of this 22-year-old man arrived back in West Michigan and was driven in a (very impressive) motorcade from the local airport to our church, a good 12 miles away. (Click here for an article from the local paper about it.) Hundreds, if not thousands, of local folks lined the streets to show their support and to welcome this soldier home. My daughter and I were among them. 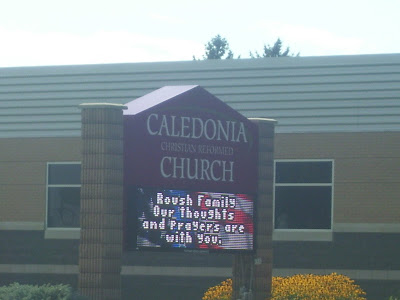 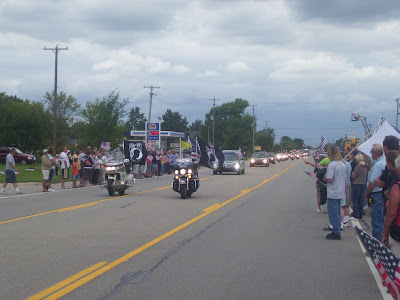 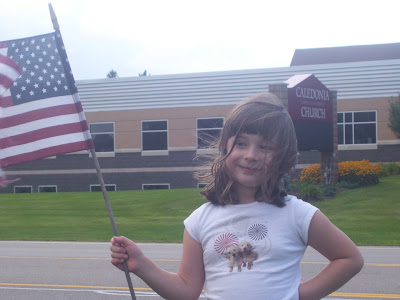 One word that has been said quite a bit over the past week --by friends, family, strangers, the media--in reference to Nick was "hero." Signs up and down the route his body traveled used this word. It was on people's lips, in their Facebook posts, and in their emails.

It is certainly a much-deserved word for this young man. Yet, I don't think it really hit me what exactly it meant--and what the implications were--until I read a posting by another 22-year-old man, also from our church (and in the National Guard), about Nick's heroism. It truly and literally brought me to my knees.

Nick wasn't magically made a hero in death. He became a hero among heroes as soon as he decided to follow God's path for his life. And because of it, he has touched and inspired many people. So many people do things for personal glory, but he didn't do that. His only desire was to follow God, and if God called him to die, so be it. He truly lived the words, "Here am I; send me." His death didn't make him a hero...His life made him a hero. Christian Patterson

His death didn't make him a hero. His life made him a hero. Nicky lived for Christ, and believed that it was God's will that he be a soldier. According to letters home our pastor shared during this morning's church service, he was a bold witness of his Savior throughout his time in the military. And, he willingly put himself in harm's way for our freedom.

I don't have to die to be a hero. We have a multitude of heroes who, in Chris' words, "decided to follow God's path" for their lives--no matter the risk, and no matter the cost.

So, I honor Nicky Roush, as well as thousands of other believers who are doing exactly what God has willed them to do, for their Savior, no matter the cost.

Please keep Nick's parents, Bob and Donna, as well as his brothers, Bobby and Kyle, in your prayers - and the entire congregation of First Baptist Church of Middleville. We are rejoicing to know where Nicky is right now, but we are still aching. And if you are interested and local, visitation is at First Baptist Middleville today, Sunday, from 5 to 8pm and Monday from 12 to 2 and 5 to 8pm. The funeral, also at First Baptist, will be Tuesday, August 25 at 11am. His burial will follow, at Mt. Hope Cemetary in Middleville, with full military honors.