Here is another Jewish holiday that several of you may not have heard of. Shavuot, which began primarily as an agricultural holiday, has become a holiday celebrating the receiving of the Torah by Moses on Mount Sinai. 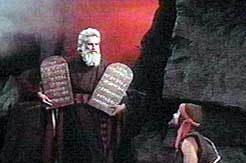 Shavuot, which means "weeks," is celebrated on the sixth day of the Hebrew month of Sivan. See this post for more details on the Hebrew calendar (which is VERY different from ours). This year, Shavuot began at sunset yesterday, May 14 and ends at sunset tonight. (See post referenced above for an explanation of the sunset to sunset thing :) )

Shavuot is one of the three "pilgrimage festivals" when Jews were required to travel to Jerusalem and bring their offerings (the other two are Passover - which I discussed here and here - and Sukkot, which is a few months away yet). It marked the end of the spring barley harvest and the beginning of the summer wheat harvest. After temple times, it became a celebration of God giving the Israelites the Torah on Mount Sinai.

According to the Torah, it took precisely 49 days, or seven weeks, for the ancient Israelites to travel from Egypt (which is celebrated on Passover) to the foot of Mount Sinai. The Torah commands: "On that same day (the 50th) you are to proclaim a sacred assembly and do no regular work." (Leviticus 23:21) This is the holiday of Shavuot. (Known to most Christians, by the way, as Pentecost)

There are a handful of traditions associated with Shavuot. One is to stay up all night studying the Torah. It's also common to eat dairy foods on this holiday. It is also common, in the synagogue, to read the book of Ruth, as well as the Ten Commandments.

As always, click on the links throughout this post for more details - or ask questions in the comments!


Had you heard of Shavuot before? What was most interesting to you?