Here's my second post on a Jewish holiday, and unlike Tu B'shevat, this one you've likely heard of (or at least have "read the story").

Are you back? Good. Now on to the holiday at hand.

At sundown this evening (see Hebrew calendar link above), the Jewish holiday of Purim begins, and ends at dusk tomorrow. This holiday celebrates the Hebrew's rescue from destruction told in the Old Testament book of Esther. In fact, the creation of this holiday is in the book itself - in Esther 9:20-23, 26-28.

Briefly, after the Jews were exiled, many settled in Persia, and through various circumstances mentioned in the book of Esther, a young Jewish girl, Esther, became queen. Her uncle, Mordecai, was a respected man in the kingdom, and he told Esther not to share her nationality with the king.  The king's second in command, Haman, had a great hate for the Jews (and Mordechai in particular), and plotted to have all Jews killed, and got the king to sign an edict allowing it. God worked through Esther and Mordecai, the tables were turned, and Haman ended up killed on the gallows he'd built for Mordecai - and Moerdecai got Haman's job in the kingdom. (That is a VERY brief summary - read the book of Esther for all the details - it's not that long!)

There are four mitzvot (commandments) regarding the celebration of Purim, and all but one come directly from Esther 9:22. Celebrating the holiday is to include feasting, giving gifts to one another, giving gifts to the poor, and reading the book of Esther from beginning to end. 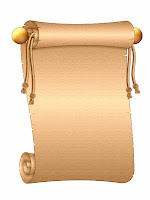 The book of Esther, referred to as the M'gila (scroll in Hebrew) Esther, is read aloud in synagogue. One of the more interesting traditions associated with this portion of the holiday celebration is the use of noisemakers. Children, of course, especially enjoy this part. As the Book of Esther is read, each time the name of Haman is said (fifty-four times!), the congregation stomps their feet, claps their hands, and shake their noisemakers (gragers) to drown out the name.

People also have feasts, give baskets of fruit or other things to friends and/or the poor, and sometimes dress up in costume. It is one of the more festive holidays on the Hebrew calendar.

There are many different traditions associated with Purim. Check out one of these sites for more details (or come back next year and I'll share a few more). Wikipedia Union for Reformed Judaism
Chabad (Orthodox Jews)

And check out a couple of Purim songs below!

Here's a favorite song of mine from Purim - it's in  English, and it even includes a bit of the Purim story. And just FYI - Hamentaschen are yummy cookies with a fruit filling (they're supposed to look like Haman's ears- check out a recipe here)

And here's another I remember - this one in Hebrew.
Purim was always a fun holiday when I was growing up. I hope you have enjoyed learning about it!


What part of this holiday is most interesting to you?