I'm over at the Internet Cafe today, talking about something ELSE I learned at the Frederick Meijer Gardens last month. Especially in this time of busyness as the school year ends, learn what I learned about ceasing striving - and Being a Human Being.


I am reminded of your sincere faith, which first lived in your grandmother Lois and
in your mother Eunice and, I am persuaded, now lives in you also. 1 Timothy 1:5 NIV

Yesterday, our pastor's sermon title was "Godly Mothers." I'm guessing his wasn't the only one with that, or a similar title, on Mother's Day. ;). He preached from 2 Timothy 5, which talks about the influence Timothy's mother and grandmother had on his faith.


And, it got me to thinking. About legacy. Christian legacy in particular.

Since I became a Christian thirteen years ago, I've felt like I was missing something that a LOT of my Christian friends had. You see, many folks I know were raised in Christian homes. Their parents were believers, and their grandparents, and great-grandparents, and so on. They had traditions and examples of how believers act - from BIRTH. To me, it was all new. And a little bit scary.

Sure, I had my own legacy of Judaism. It was pretty cool - and I loved having such an in-depth knowledge of the Old Testament that many of my "gentile" friends did not have.

But still, I wished, for a long time, that I had grown up in a Christian home, and hadn't had to wait until I was in my 30's to find Christ. I didn't have a Eunice, or a Lois, growing up. I wasn't raised on Christian principles.

And I was feeling that again during church, as Pastor Pike talked about folks with that kind of legacy, who often didn't realize how blessed they were. My my head nearly detached from my neck, I was nodding so vigorously.

But then a thought entered my head that changed my perspective.


You may not have a Christian legacy, but you can be part of one. 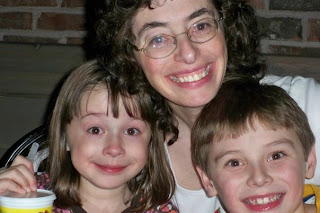 No, I may not have a Eunice or Lois in my background, but I can BE one - to my children, and my children's children (eventually). My sincere faith can be witnessed, and exhibited, through me, which just might live in my own offspring, and then in theirs.

And that's some serious motivation to live for Him, isn't it?

And, because the ENTIRE time I wrote this post, I had a certain song going through my head, I HAD to share it. :)

Do you have a legacy of Christianity in your family? In what ways have you benefited from it? Have you thought about the blessings of it? If you don't, have you envied people who did? What can YOU do to become a Lois or Eunice to your family - or the younger generation in general?