Could you imagine giving it all up? Your home. Your family. Your laptop. Your clothing. Your friendships. The food in your refrigerator. Your car. Everything you value on earth.

I'm not ready to do this, and I'm guessing most of you, if you are honest, aren't either. There might be someone you'd give all these things up for: a spouse, maybe a son or daughter, or perhaps a parent. But it would be a hard decision, wouldn't it?

But what if you were asked to do this - to give up everything - for someone who didn't like you? Would you be willing to make such a sacrifice for someone who would be glad to see you dead?

Christ did - and He gave up even more than that.


But God demonstrates his own love for us in this: While we were still sinners, Christ died for us. Romans 5:8 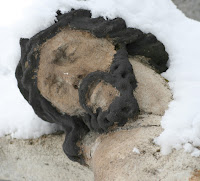 He gave up His life, His possessions - and even His connection with God the Father - so that we (those who were still sinners, and hated everything about God) could be in a relationship with Him.

In seven weeks, we will all celebrate Easter, remembering all Christ gave up for us, and his triumphant resurrection from the dead on the third day. Because of all He gave up, we can be in fellowship with Him.

Two days from today is Ash Wednesday, and the beginning of Lent. While many Christians do not necessarily celebrate Lent as it is in Catholic and other Christian denominations, the idea of giving something up during this time of reflection on Christ's life, death, and resurrection is becoming more widespread. And I, for one, don't see it as such a bad thing.

A favorite food? An enjoyable activity? Some piece of technology? These seem like small sacrifices compared to my suggestions earlier, don't they? And even smaller when we see what Christ gave up for us. And every time you wish for that "thing" you gave up, you can remember the sacrifice God made so you could be saved.
**

How often do you ponder Christ's sacrifice for you? Do you generally give up something for Lent? Will you this year?