This is an old challenge entry (in all seriousness, pretty much ALL of them are old, considering how infrequently I'm entering these days!) from the geography quarter. Topic was USA. And, if you're interested, this story will eventually become a novel. The research was absolutely, positively fascinating. I wish I had time to do a bit of tweaking, but it's a crazy day, so take it as I sent it! (I did get an EC with this one, so it can't be all bad.)


NEW
By Joanne Sher
Anticipation wasn't helping her mood in the least. Phillip and Anthony were getting fidgety and restless, and she didn't blame them. The scenery, the accommodations, the company--nothing had changed in over a week. Even the meals, though filling enough, were bland and without embellishment. 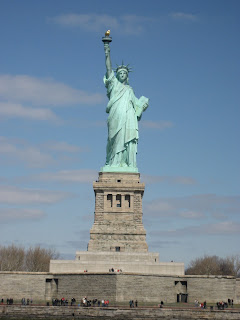 
Over 12 million immigrants passed through Ellis Island Immigration Station between 1892 and 1954 on their way to the USA. Annie Moore, age 15, of Cork County, Ireland, was the first.

www.ellisisland.org
* *
Thanks for reading! Be sure to check the links below for more great fiction!