I am honored to be hosting Friday Fiction this week for the lovely Karlene at Homespun Expressions. Be sure to check out the links at the bottom of my post to read even MORE wonderful fiction - and PLEASE link up yourself with your own contribution!

I was absolutely FASCINATED with the research I had to do on this story, which I submitted to the FaithWriters' Writing Challenge during the infamous "genre quarter." I was somewhat familiar with the history of this time, but had no idea of some of the details. This is based on actual people--especially the MC. Hope you enjoy, and learn something.

The Good Witches
"I don't like it one bit! My mama ain't a witch." Dorothy Good put her hands on her hips and gritted her teeth.

Her father, William Good, rapped her on the head and put his finger over his lips. "You watch your tongue in public, girl. And you get started on dinner. You got to be the woman of the family for a while now."

Dorothy bowed her head and walked away from the Salem town square toward a small campfire in the abutting woods. There she started a couple onions and a potato boiling in a stew pot over the fire. Despite being only four years old, her mother had already taught her how to prepare a hearty meal out of anything she could get her hands on. The onions were growing alongside the edge of the woods, and she'd snagged the potato off the ground in front of Samuel's Grocer, where a customer had likely dropped it.

"Just because mama gets mad sometimes and talks to herself don't mean the devil's got her," Dorothy mumbled, stirring the meager provisions with a stick she'd picked up. "Do I ever miss her."

Her father approached the fire and sat beside it.

Dorothy stopped stirring the vegetables and looked straight into her father's eyes. "Are they ever gonna let mama outta that jail?"

He sighed. "I dunno. If she's guilty of witchcraft they sure won't."

Dorothy's eyes were afire. "But she isn't, papa. She isn't!"

Dorothy, accustomed to joining her mother begging for food and shelter from the locals, had given up on seeking assistance from the townsfolk more than a week previous. Whenever she approached anyone, it seemed they gave her disapproving looks or called her a witch. Papa had warned her to stay away from the locals, lest she be arrested as well.

Instead, she spent much of her time in the woods, venturing into the town square only to get food or some other necessity.

"Look! It's the devil's spawn!" A girl in her early teens walked toward Samuel's Grocer, where Dorothy was scanning the walk in front of the shop for dropped goods.

"Am not, Miss Ann Putnam. And my mama is NOT a witch." Dorothy kicked dirt at her accuser.

Gasping, Ann wagged her finger at the girl. "How dare you. I'll make sure you're sorry you even spoke to me, you little witch." 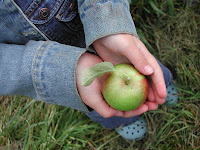 "An apple!" Dorothy picked the shiny piece of fruit off the ground and brushed it off with the edge of her ragged skirt. "Papa will be pleased."

Inspecting the apple closely as she ambled down the street, the girl bumped her shoulder against a man about as tall as her father.

"'Scuse me," she mumbled under her breath, trying to hurry back into the woods.

"Come here, little lady." The gentleman put out his hand.

Dorothy paused and glanced about, debating whether to approach the man or run away. His smile convinced her to do the former.

"Yes sir?" she asked in her most polite voice.

The man's smile quickly turned to a smirk as he grabbed the girl and began carrying her toward the Salem courthouse.

"Dorothy Good, you are under arrest for afflicting another with witchcraft."

Dorothy kicked and screamed, but was unable to wiggle out of the man's grasp.


Author's note: Dorothy Good, age four, was arrested and interrogated in late March of 1692 and held in a Boston prison for 9 months in chains. She was the youngest person arrested for witchcraft during the Salem Witch trials, and, according to her father William, was permanently damaged from her ordeal. Her mother, Sarah Good, was one of the first women arrested for witchcraft in Salem in early March of 1692, and was executed by hanging in mid-July of the same year.


Thanks for reading, and be sure to check out the links below for more great fiction.