Passover Dinner - A Visit with Christ

Last Friday evening was a wonderful experience for me. Not only was it Good Friday, which, of course, is an excellent time of reflection on Christ's sacrifice for us, but I had an opportunity to attend a 1st Century Passover dinner (If you're interested in some of the ways Passover and Easter are linked, check out my Ponderings on the Pentateuch post from last Thursday at Exemplify's Online Blog.) at our church.

I've been to several Passover dinners--most before I came to Christ. This is, however, only my second which focused on showing Christ in the many traditions of this Jewish holiday. And, for both my husband and me, it was very enlightening.

We sat at tables lit by olive oil lamps as used in the first century. The foods we ate--from dates to hummus to meat stew--were reminiscent of Mideastern meals of that time. And, as Jesus and his disciples did at the Last Supper, we ate unleavened bread and drank of the fruit of the vine (though, as good Baptists, ours wasn't exactly fermented.). 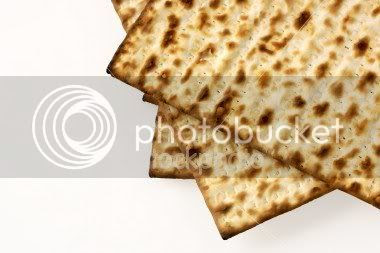 Other traditional fare of Passover included bitter herbs (symbolic of the bitterness of slavery the Israelites underwent) and charoseth (a mixture of honey, nuts, and spices meant to symbolize the mortar the Israelites used to build the structures from during their slavery). Eggs, as a symbol of new life, were also a part of the Passover table. (So maybe Easter eggs aren't so bad after all, eh?)

Knowing that Jesus' last meal was a Passover supper, likely very similar to what we experienced Friday evening, made the dinner very unique. The symbolism of the holiday He was celebrating as His last was no accident. This weeklong celebration of redemption from physical slavery was actually still going on when He rose from the grave to redeem us from the slavery of sin.

Most everything Christ did at the Passover meal we know of as the Last Supper was symbolic. One of the most fascinating, to me, was related to the cup he drank "after dinner."

You see, there were four glasses of wine drunk at every Passover dinner meal, and each was symbolic of a different redemption God provided according to Exodus 6:6-7--I am the LORD, and 1)I will bring you out from under the yoke of the Egyptians. 2)I will free you from being slaves to them, and 3)I will redeem you with an outstretched arm and with mighty acts of judgment. 4)I will take you as my own people, and I will be your God.

The first two cups are drunk even before the meal begins. The third, however, is drunk right after the meal. And, according to Mark's gospel, the "communion" wine was taken right after supper, and was, therefore, the third cup - the redemption cup. And do you remember what else Christ said?


This is my blood of the covenant, which is poured out for many," he said to them. "I tell you the truth, I will not drink again of the fruit of the vine until that day when I drink it anew in the kingdom of God." Mark 14:24-25

So, Jesus skipped the fourth cup of wine--the promise to take the Israelites as His own people. And He will NOT drink it until He is in the kingdom of God.

Blows me away, you know?

I may post more on this dinner in future days. Be sure to check out my post this coming Thursday at Exemplify (there will be a reminder here that day too!), which will be on another fascinating aspect of this service.

Thanks for reading - and feel free to ask questions, as I may address them in further posts!
Blessings, and may your own understanding of redemption be enriched.