Welcome to my contribution to Friday Fiction, hosted this week by Lynn Squire at Faith, Fiction, Fun and Fanciful. Be sure to stop by her blog to read more great fiction, and to link up your own fictional piece at the "Mr. Linky" gadget at the bottom of her post.

This is a very early entry for me. I wrote it only a month and a half after finding the Faithwriters Writing Challenge, but it is still a favorite of mine, partly for the message I was able to convey. I hope you enjoy it!

PEACE LIKE A POND?
The sun was just creeping over the tree line, spreading its glow onto the landscape. Leaves crackled underfoot, but not loud enough to drown out the rushing of the water against the rocks.

Harold Mason, sauntering along the riverbank taking the last drag on his Camel, increased his pace to a slowish trot, tossing his spent butt ahead of him and squashing it with the heel of his work boot as he ambled along.

Mason turned around with a start as he felt a jab in the small of his back.

"Hey - pick up that thing! We’re here cleanin’, not litterin!"

"Guards," Mason grunted under his breath as he took a few steps back, grabbed the cigarette butt and put it in the small orange bag tied to his back belt buckle, bumping into the guard.

"Sorrrrryyy!" Mason said with a sheepishness that was obviously phony.

Tittering, several of the other inmates looked Mason’s way and gave him the thumbs up. Mason smirked. Oh, how he loved getting a rise out of the guards, and a laugh out of the guys!

The group of them - about a dozen total - walked to a clearing, where it appeared several groups had picnicked recently. Food, napkins, cups, old boxes and other assorted trash were strewn about.

The men got to work, some more enthusiastically than others. Mason began picking up assorted garbage and slam dunking it into his trash bag.

Mason turned to see a young inmate, probably half his own 40 years, gathering trash beside him and glancing his way.

"I know your name - everyone here does. I’m John Phillips. Just transferred here a couple weeks ago."

Mason nodded. The two men returned to garbage collection, working side by side in silence for several minutes.

"Mason, can I ask ya something?"

"You can ask," Mason quipped.

"Noticed your cross tatt. You a Christian?"

"What do you think?" he snickered.

"I may have been one before, but I sure as heck ain’t one now! Why would God stick me here? I didn’t even do anything! How can I follow Him when He deserts me?!"

"Who the HECK can have peace when they’re in jail for a crime they didn’t commit?!"

"Paul did. Peter did. So did Joseph and Jeremiah."

Mason rolled his eyes and turned away, focusing on picking up a large pile of napkins that had blown over the picnic area.

"You guys can take a break," the guard shouted. "Sit down and have your lunch."

The men each grabbed a box lunch from a crate the guard had brought out and sat on the ground. Phillips brought his lunch over by Mason and sat. Mason shifted, facing away from Phillips and toward the rushing river.

"God never promised you a stress-free life, you know, Mason."

"And why the heck not, Mister Christian??"

"Do you see that river out there, Mason? Does it look peaceful to you?"

"Guess so. But what does that have to do with anything?"

"Look at how the water pounds the rocks. Sure doesn’t look calm to me!" 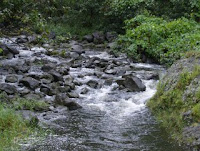 "OK - guess not! Still; what are you getting at, Phillips?"

"God promises us peace like a river - you remember that?"

Mason nodded, turning toward him.

"He doesn’t promise us peace like a pond - now THAT is calm. A smooth sail; an easy life. That’s what you were expecting. He promises us peace like a river: peace and security as you go over the twists, turns, and boulders of life. Jesus promised us trouble in this life - but he also said we could have His peace through it.

"God hasn’t let you down, Mason - you have let you down! You can have peace - His peace - peace like a river!"

Mason looked at Phillips thoughtfully, then walked out to the river’s edge, watching the water drift down the river - past rocks, logs and other obstacles in its way.


Thanks for reading! Don't forget to stop by Lynn Squire's blog for more great fiction!
Posted by Joanne Sher at January 16, 2009